LED Bulbs. Not Always Reliable. In Fact, Some Aren’t Even Safe!

A lot of people are promoting LED bulbs these days. I have been evaluating LED bulbs for a couple of years now and I do think they have reached the point where they are worth considering for many applications in the home.

However, as I’ve looked closer at some of my LED bulbs I have two concerns:

1. Many of my LED lights have had a much shorter life than claimed.

2. After taking some of the failed lights apart I no longer consider some of the designs safe. (I’m removing some from my home.)

Here is the background from an engineering perspective:

An individual LED may have a 50,000-hour design life, but in practice that LED is usually combined with 20 to 50 other LEDs and a circuit with a dozen other components. Even if one LED is reliable, when it is combined with a bunch of other components, the system, (the bulb in this case) is much less reliable than the individual parts. In addition, if the design isn’t done well to start with the components may be used outside of their design parameters which will often dramatically lower their actual lifetime before failure.

I think that is the case with some of the LED failures I’ve seen on “generic” LED bulbs purchased over the internet. Some of these bulbs have lasted less than two years in moderate use, some have even failed in the first few days.

Two of the LED bulbs I purchased at Costco failed early also. I noticed Costco stopped carrying that type shortly after my purchase so I’m thinking I wasn’t the only one with a negative experience.

The term “safety” is a bit subjective, as anyone who deals with home inspections knows. In this case, my reference for safety comes from electronics design work I did some 30 years ago relating to the safety standards of Underwriters Laboratories.

Fundamentally, a design needs to keep potentially lethal voltages away from human contact. Voltages greater than 48V are considered lethal. To keep that safety separation you need a casing, or small vent holes, or some distance designed into the product, or an isolation transformer or some combination of these.

The circuitry in a lot of these inexpensive LEDs does not have an isolation transformer or any of the other safety methods. And if there is no cover on the LEDs there is voltage exposed on the front of the bulb.

Here is an example from one of the failed and unsafe bulbs: 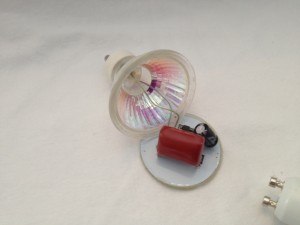 The bulb circuit is just a high voltage AC capacitor, two resistors, a bridge rectifier and the LEDs in a series-parallel string. If I touch one of the exposed LEDs on the front of the bulb when it is on I would feel a poke. I consider this quite unsafe.

I notice on one of the newer replacement bulbs I purchase there is a lens to provide a level of isolation from the dangerous voltages. You can see this on the bulb on the right: 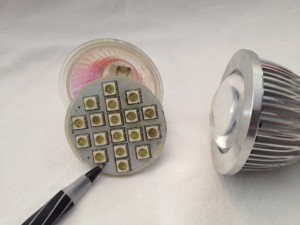 If you touch the bulb on the left where the pen is pointing while it is on you will likely get a shock. The bulb on the right looks reasonably safe because the lens keeps you from being able to touch any components.

Finally, on some of the larger bulbs available now there is actually an isolation transformer as well as a protective case. These look to be much safer and even include an approval stamp from Underwriters Laboratories. The large bulb in the middle is an example of these. I am comfortable with these products and you can even see the safety certifications in fine print at the base of the bulb:

For additional information on LED bulbs in practice check the post at http://actvra.in/49Dq from home inspector Reuben Saltzman.